Please note that the 45th AGM of Clane Community Council will be held this coming Monday January 28th 2019 at 8pm in Nexus – Clane Project Centre – on the Prosperous Road.

Come along to learn what Clane Community Council has been progressing on behalf of the community, and help inform our plans for the year ahead.

At a previous AGM there was a proposal from the floor for Christmas Lights in Clane. Have you a contribution you would like to make?

All are very welcome. 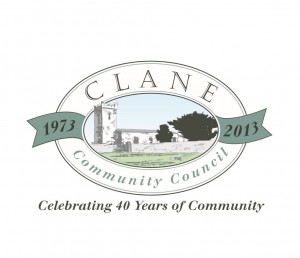 Chairman John Kennedy addressed the audience, providing a status of all the various aspects of the council, and an update on its plans. He also sincerely thanked all the supporters of the Council, as he did all members of the Council for their hard work during 2012. The Secretary’s Report prepared by our Secretary Nick Fitzgerald was presented by our Assistant Secretary Des Drumm. It detailed the activities of the Council and its subcommittees during 2012. Treasurer Paul Carroll provided a comprehensive update on the Council’s financial position.

A motion was passed, adopting the new Constitution prepared carefully over the last year.

Executive officers for 2013 were also nominated, seconded, and elected:

For more information on the night please see here.

This coming year, our 40th, promises to be a busy but exciting year for the Council. We look forward to celebrating ’40 years of Community in Clane’ with everybody through all our various activities in the coming weeks and months.

Clane Community Council will hold its Annual General Meeting at 8pm on 28th January 2013 in the Abbey, Clane. The meeting will include a motion to adopt an updated constitution. All are very welcome. END_OF_DOCUMENT_TOKEN_TO_BE_REPLACED