Sunday’s Well was located by Clane Motte, in the grounds of the Cois Abhainn apartments, until relatively recently.

With the support of Kildare County Council, Clane Community Council’s Hertiage sub-committee commissioned a report into the well. We are delighted now to publish this report online: Sunday’s Well Report

Congratulations to Clane’s St. Patrick’s Festival Committee who pulled off such a great week of festivities yet again, this year focused on the theme of Health and Fitness.

Clane Community Council hope you enjoyed our float which was powered by volunteers of all ages from Clane Tidy Towns, Clane and Rathcoffey Community Games, Clane Friary and Abbey Cemetery, Clane Heritage and the Abbey Community Centre. Generously sponsored by local business Power Food Technology, it demonstrated the wonderful power of the community working together. 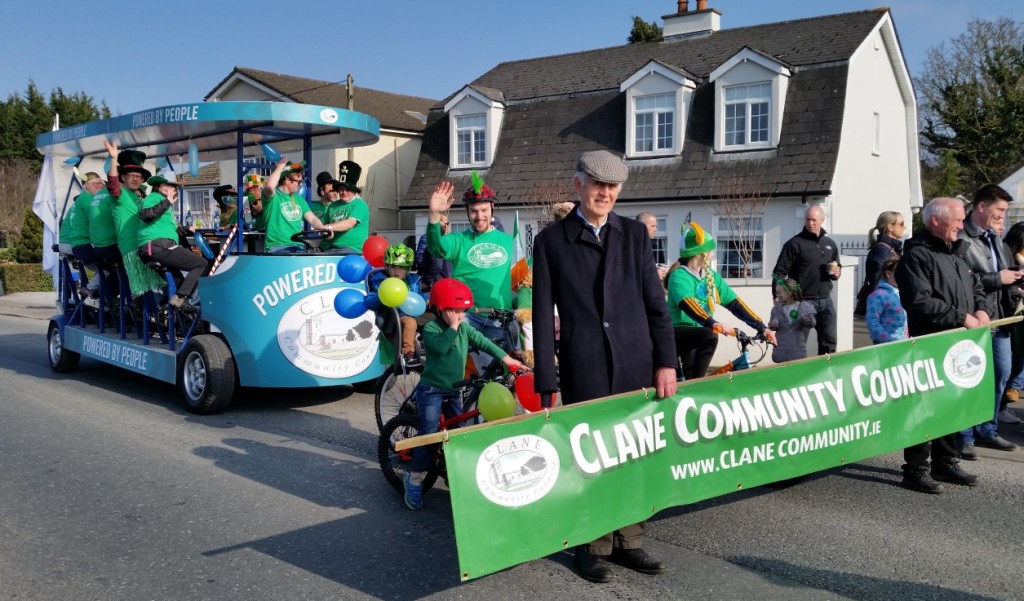 Clane Community Council’s Float about to power up Main Street 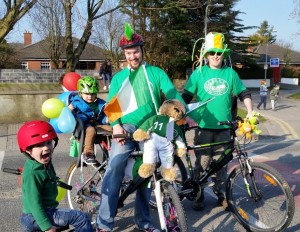 Some of the Guard of Honour for the main float! 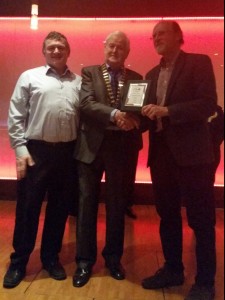 Here’s to the “Health and Fitness” of everyone in Clane in 2016. 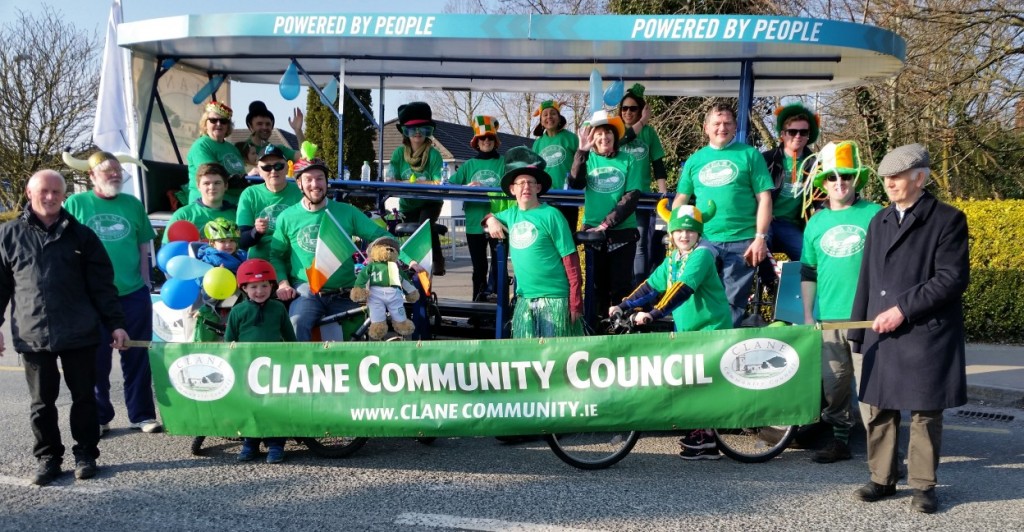 Happy St. Patricks Day from all in Clane Community Council 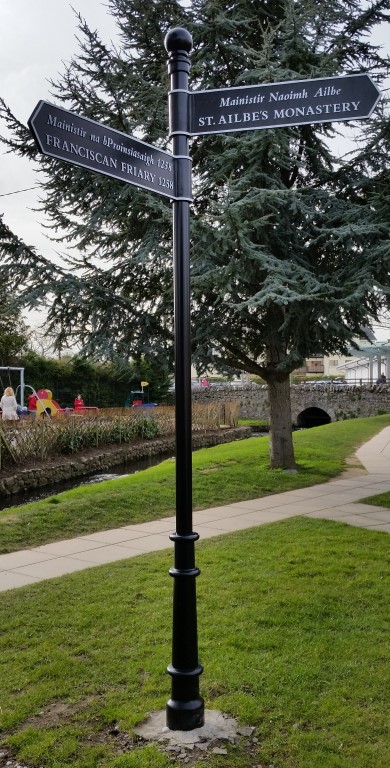 During 2014 the Heritage subcommittee of Clane Community Council and Clane Local History Group worked together to design and deliver a new set of Heritage signage for the village of Clane.

First of all some key sites were selected from the rich list already featured in the Heritage section of this website. The key features of each location were then condensed into a sentence or two that could be squeezed into a plaque.

With heritage funding from Kildare County Council and a number of generous donations from the locality, the signage was then commissioned, manufactured and delivered.

In recent weeks Kildare County Council have started to install the new arrivals. Already two finger posts, a number of plaques, and the Information Board on Main Street are in place.

In the coming weeks and months you can expect to see the remaining plaques and posts go up.

We hope you enjoy this new amenity for the village! 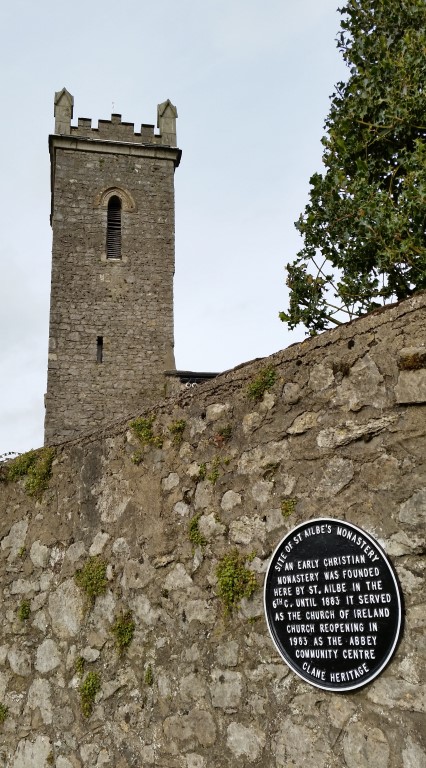 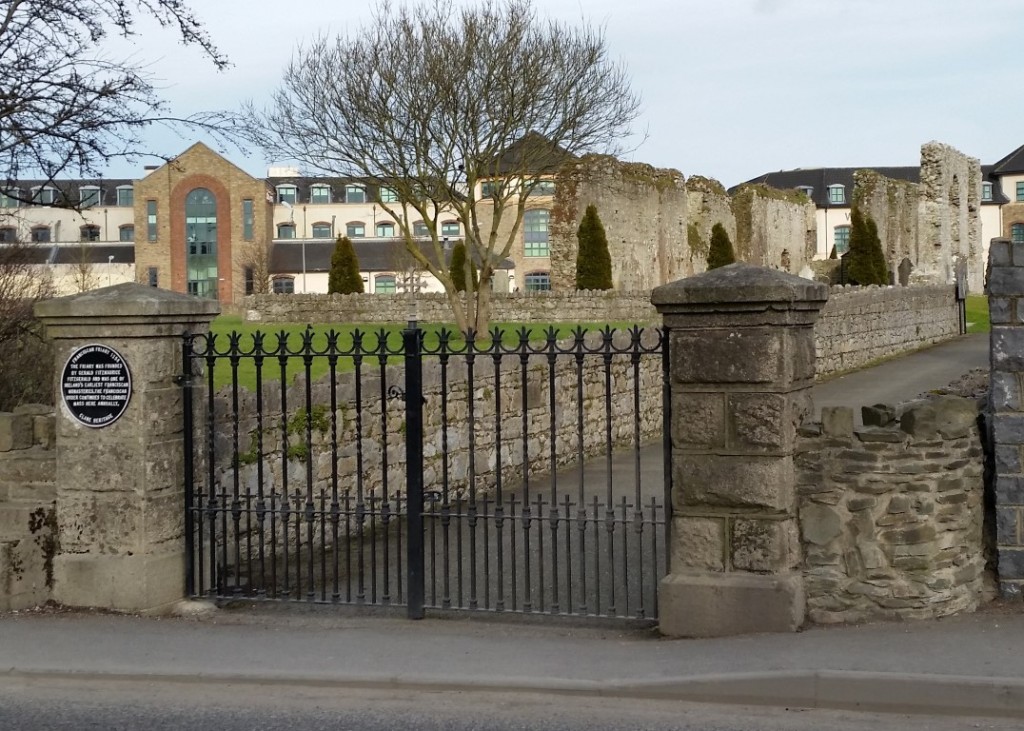 Building on different walking tours and historical maps that were developed in Clane over the years, the Heritage Committee of Clane Community Council in collaboration with Clane Local History Group are delighted to unveil new online maps highlighting some of the wonderful heritage in and around Clane.

From the landmark Abbey to the discrete Bullaun stone – the oldest man made object in Clane – the maps feature and introduce almost twenty sites of significance.

Why not print them out and enjoy a leisurely walk around the town or cycle or drive into the countryside.

A big thank you to the members of Clane Local History Group who helped compile the information. The group regularly hosts wonderful talks and events – find out about their next one on the Community Calendar.

The new Heritage Site maps are located under the Heritage menu of https://ClaneCommunity.ie.

Do you have old photographs of Clane that you think might be of interest? How about having some of them published through Clane Community Council Heritage Group?

All you need to do is send a copy with some key information to us and we will do the rest. If you supply an original we will scan it and return the original to you. Then sit back and see your photograph appear in a locally produced publication.

Any photograph connected with people from Clane or the Clane area itself can be of interest.

You can email photos to us at claneheritage@gmail.com. Alternatively, please drop your photos along with details to any of the following:

Please remember to include your contact details so your originals can be returned to you safely.

The week starting August 18th is National Heritage Week and this year we are delighted to announce it can be celebrated in Clane.

On Sunday 19th Clane Community Council has arranged a Wild About Clane Nature Walk by the Liffey, with experts from Birdwatch Ireland and Kildare Bat Group. The walk starts at 8pm in the Abbbeylands Shopping Centre Car Park.

On Tuesday 21st August starting at 8pm in the Library, Clane Local History Group are presenting a talk where local history experts will present on the topic Main Street Clane: Its Buildings and People.

Why not come out and enjoy your local heritage at one or both of these events…all are welcome and they are free of change. We look forward to seeing you there. 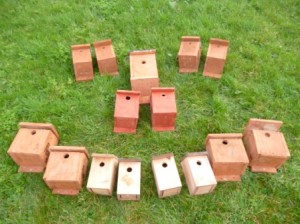 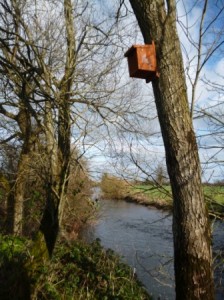 Clane Local History Group is creating its own piece of history on April 18th at 8pm in Clane GAA’s Conneff Park. Mario Corrigan of Kildare County Council’s Art and Heritage services will launch their new journal, Coiseanna. All are very welcome to attend this special occasion.