With the Irish Open 2016 coming to the K Club, Clane is one of the localities selected by Kildare County Council to get involved in an event which will see some of the world’s finest golfers play here in Kildare, including Rory McIlroy and recent Masters winner Danny Willett. Clane has declared itself Open for the period of the Irish Open, May 19th to 22nd and is looking forward to welcoming visitors to this vibrant community with its fascinating history and buzzing array of shops, cafes, restaurants and bars.

The centrepiece of Clane Open is the Friday night, 20th May, which will feature a FREE concert in the Main Street. It will commence at 6.45 pm with Clondalkin Youth Marching Band marching from McKennas along the Main Street to the church and followed with a concert in the Church grounds at 7pm featuring singer/songwriter Mick Dunne, acclaimed fiddler Margaret Doherty and the Angela Brien school of Dancing as well as face-painting for children. There will be music in all the pubs that night too and shops will be open late- so do come along and enjoy the hospitality of this attractive and friendly village.

On Saturday 21st May there will be a Clane History Walk, also free of charge, meeting at Manzor’s Village Inn car park at 11am, with four guides taking different topics such as Clane’s role in 1798, the little known tale of Mathilda Tone, visiting Clane’s oldest man-made object and the “Garden of the Angels” to mention just a few stories in this hour long journey into the past. Craft beer is big news at the moment and Clane’s own Kelly’s Mountain Brew will be open between 12 noon and 3pm in Clane Business Park if you want to call by and learn all about brewing!

Other events to be held during the week include a shop window competition, children’s involvement through a golf-themed colouring competition, with prizes awarded at the concert, as well as a visit to the schools by a golfing pro “ambassador” from the Open. No less than two of Clane’s own Opens will be held in Millicent Golf Club, one for Seniors on Tuesday 17th May and a general one on Wednesday 18th May.  All this adds up to a lot of reasons to include a visit to Clane in your plans for Open week! 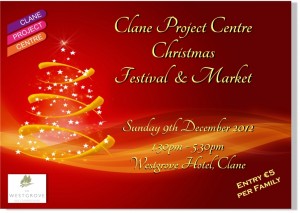 Sunday the 9th of December is the date for the Clane Project Centre Christmas Festival & Market. An indoor market with plenty to see and do, there will be stalls by local business, designers, artists and craftspeople and special entertainment for children.

From Christmas Carols to Bouncy Castles, and face painting to a relaxing cuppa, there will be something for everybody – indeed rumour has it a particular VIP is making special plans to attend.

Doors open in the Westgrove Hotel at 1.30pm on Sunday December 9th and the event runs to 5.30pm. Entry €5 per family. Proceeds go to the Mens Shed.

For more information on the event, or indeed to arrange a stand at the fair, contact Clane Project Centre at 045 861500.