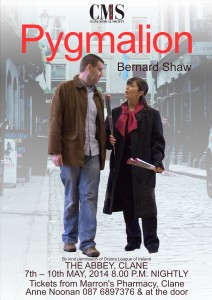 Clane Musical Society preparations are well underway for their upcoming staging of George Bernard Shaw’s Pygmalion from May 7th to 10th in the Abbey.

With their wonderful success in the All Ireland AIMS/HB competitions last year we look forward to seeing their production of one of Shaw’s most popular plays, the inspiration for the musical and the film My Fair Lady.

Clane Musical Society’s annual concert Sing into Spring will be staged in The Westgrove Hotel, Clane on Friday 28th February at 8.00 pm. The concert promises to be a wonderful night of musical entertainment. Tickets (€15 for adults and €10 for children under 16 and Senior Citizens) are on sale in Marron’s Pharmacy or may be booked by phoning Anne Noonan at 087 6897376. There has already been some advance block-booking, so don’t be disappointed – book your tickets early and enjoy a great night’s entertainment with Clane Musical Society as we Sing into Spring.

Clane Musical Society has outdone itself this year in the All Ireland AIMS/HB awards held recently in the Gleneagle Hotel in Killarney. With four nominations the society returned to Clane with a tremendous hoard of sliverware…

Well done to all who participate in and support Clane Musical Society in any way. In this their 30th year they have done their community very proud. Here’s to their next 30 years!

The winners will be announced at the AIMS/HB awards banquet which will be held in the Gleneagle Hotel in Killarney on Saturday 15th June. We wish the nominees all the best and CMS would like to thank all those who supported their production of Sweeney Todd.

Clane Musical Society’s 30th Musical production will be Little Shop of Horrors which will be staged in the Abbey from 19th – 23rd November.  There will be audition rehearsals on Thursday 20th June and Wednesday 2nd July in preparation for the auditions which will be held on Sunday 7th July. Anyone interested in becoming involved is encouraged to email clanemusicalsociety@gmail.com or phone CMS PRO Michele Kelly on 087-9716402.

The play readings continue each month in Manzors. The next play reading is on Wednesday 26th June and the play to be read that night will be One Flew Over the Cuckoo’s Nest. If you are interested in reading the play or just listening to the play why not join them in Manzors at 8pm.