It is not just fish that live underwater in the River Liffey at Clane. Our stretch of the river is also home to a remarkable lobster-like animal: the White-Clawed Crayfish. 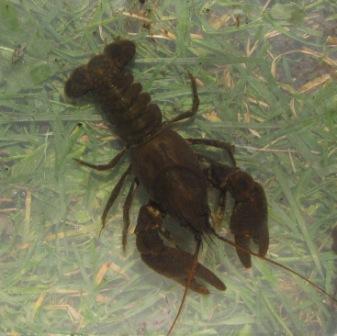 The White-Clawed Crayfish (Gliomach Fionnuisce) is a freshwater crustacean that occurs in various rivers, streams and lakes around Ireland. Although it occurs elsewhere in Europe, the Irish population is of international importance as a disease has seriously affected populations across Europe and Britain. It is a fully protected species here.

Crayfish can grow up to 12 cm long, and they eat plants and whatever other food  – for example insect larvae – that they can catch or scavenge. Crayfish themselves are prey for other animals. Salmon, Pike and other fish will feed on juvenile Crayfish, while adults have to watch out for animals like Otter, Grey Heron, and the recently introduced Mink. [1]

Like many of our animals, the White-Clawed Crayfish has a remarkable breeding cycle. The female lays her eggs in October or November, gathers them under her tail, and remains relatively quiet for the next 8-to-10 months. After they hatch in June or July, the young Crayfish stay attached to their mum until their second moult. Finally, the mother can start moving again, and treat herself to a very well-earned meal.

Juvenile White-Clawed Crayfish, before being returned back into the river. (J. Kennedy)

Here is a video of four of these Crayfish discovered during a cleanup of the River Liffey at Clane. The Crayfish with the widest circular-looking ‘tail’ was carrying eggs (tucked in under her tail). All of these Crayfish were returned back to the river, to a hastily constructed underwater rockery. We hope that the Crayfish will be happy and safe here, for many generations to come.

[1] For more detailed information on White-Clawed Crayfish in Ireland see Irish Wildlife Manuals No. 1 by J. D. Reynolds, and other reports published on the NPWS website.